Due to staff shortages at partner libraries and delivery services, you may notice some holds taking longer to arrive. Thank you for your patience and for using your library! 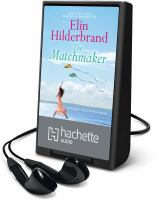 Also in this Series

Other Editions and Formats

General Note
One set of earphones and one AAA battery required for listening.
General Note
Title from Playaway label.
General Note
"HDAUDIO."
General Note
Previously released by Hachette Audio.
General Note
Issued on Playaway, a dedicated audio media player.
Participants/Performers
Read by Erin Bennett.
Description
"48-year-old Nantucketer Dabney Kimball Beech has always had a gift for matchmaking. Some call her ability mystical, while others - like her husband, celebrated economist John Boxmiller Beech, and her daughter, Agnes, who is clearly engaged to the wrong man - call it meddlesome, but there's no arguing with her results: With 42 happy couples to her credit and all of them still together, Dabney has never been wrong about romance. Never, that is, except in the case of herself and Clendenin Hughes, the green-eyed boy who took her heart with him long ago when he left the island to pursue his dream of becoming a journalist. Now, after spending 27 years on the other side of the world, Clen is back on Nantucket, and Dabney has never felt so confused, or so alive. But when tragedy threatens her own second chance, Dabney must face the choices she's made and share painful secrets with her family. Determined to make use of her gift before it's too late, she sets out to find perfect matches for those she loves most. The Matchmaker is a heartbreaking story about losing and finding love, even as you're running out of time"--,from publisher's web site.
Local note
PLAYAWAY

Note! Citations contain only title, author, edition, publisher, and year published. Citations should be used as a guideline and should be double checked for accuracy. Citation formats are based on standards as of August 2021.